Narrative [I THINK FOR THE LAST TIME] 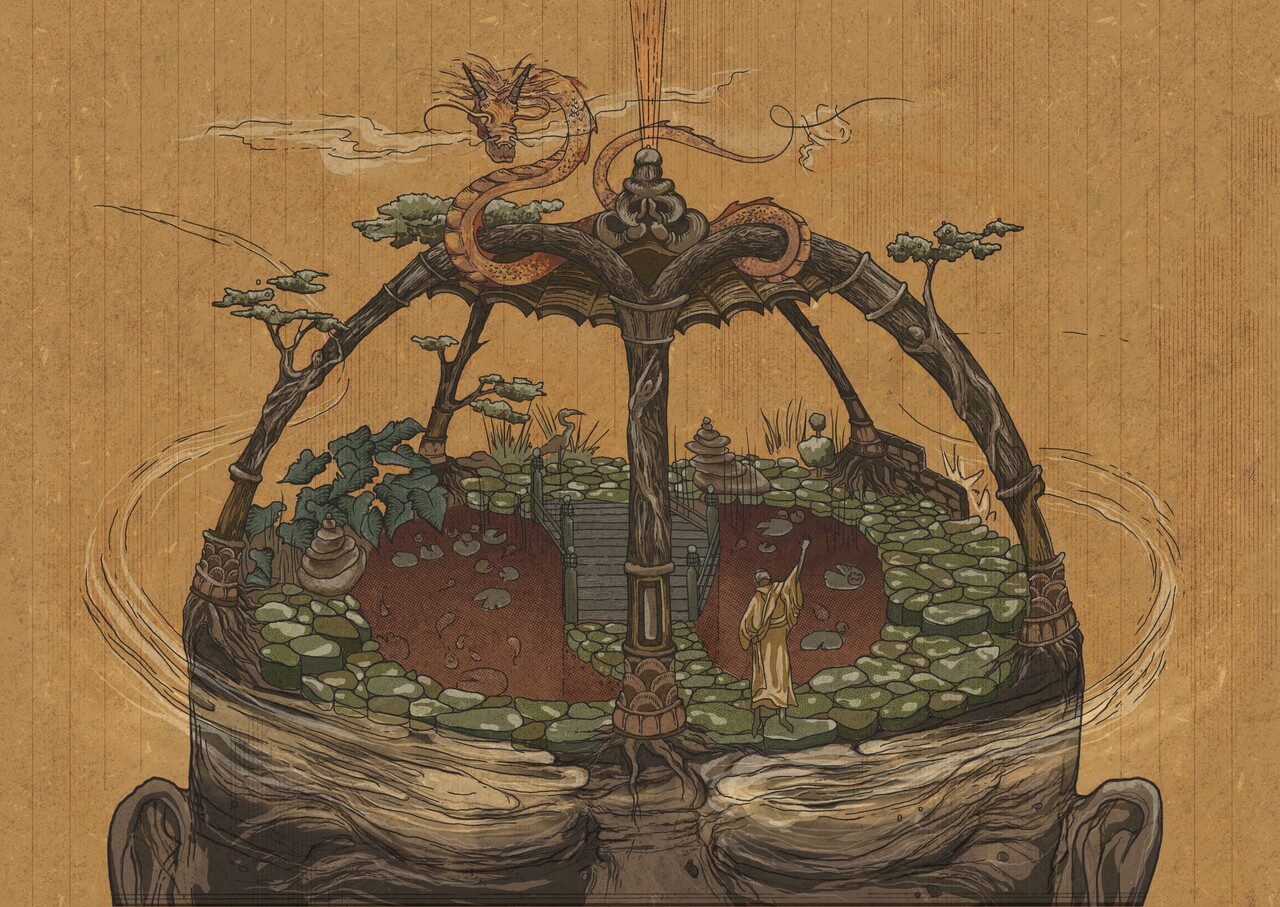 He had learned the names and ways of all the lilies and ferns but the Gardener wondered why he was still lonely. He’d taught the trees how to find water, the ferns how to store it, and the lilies how to clean it. Because of this, there were fish for the birds and birds for the dragons who brought rain and sun and night. But there was no one to see or remember these ten thousand years moving in circles at a pace everyone could keep. The gardener had balance, he had time, and he had space. But he had no one to share it with, nor anyone to give it to.

Perhaps if he thought hard enough, he could change this. He looked at the paths he had paved, the stones he had stacked, and the bonsai dancers he had crafted over the centuries, and decided what his garden needed was a fountain. Not a fountain just to be seen and heard, but to be lived in. He would feed it on one side with all he knew and loved of the past, and on the other, all he saw and hoped for in the future.

The pools began to fill with his mind. He could feel a million souls awakening, tiny, quiet, and amazed on their continents. To help them navigate the infinity of these waters, he imbued the people with his years of observation, ingenuity, and play.  To give them layers through which to experience the garden, he gifted them with the powers of sight, hearing, touch, smell, and taste.

One million pairs of eyes opened. The people pointed to the skies and water, at the way the light changed, and then at themselves with questions in their eyes. They knew how to build and learn with their hands and minds, but Why? they asked. Why, to share time of course, the black pines remarked. Indeed there was time everywhere they looked, but the people insisted on looking further. Why? they asked, their voices louder. To share in the balance, the heron offered. The balance she spoke of was evident all around them; wherever taking went, giving walked hand in hand. But the heron’s world was simple, the people said, and they continued looking for a greater authority. Why? the people asked, louder still. To share in the space, the dragon explained to them from his place in the sky. But even the dragon, who had brought them rain, sun, and night, was brushed aside and the people continued turning over stones and walls for answers.

From anywhere in the garden, humankind could be heard taking sides against itself. Soon, digging and building joined the noise. The rest of the garden looked up from nests and dens. There was never anything to decipher! it objected. There is no forward, no backward! Not for the plants nor the rain nor the wind! All of life exists in circles!

Still, the people mobilized and nothing was spared questioning. The Great Search had begun. Despite their inherent abilities, the one thing they could not put together was how to sit still or that they had been created to enjoy the garden, not the other way around.

During all of this, the Gardener was quiet and sleep was approaching quickly. He had never needed rest before but he had also never fed so much of the garden with so much of himself at once. He felt the fountain growing, and himself shrinking along with his intention. What was the fountain for and how had it become this much work? Whom had he planned to show it to anyway? He only knew that he needed rest. As the love for his garden welled up inside of him, his eyes closed slowly and heavily. One day, he thought, he would share the ten thousand beautiful years of his garden with others and it would be worth all the loneliness he’d accrued from giving.